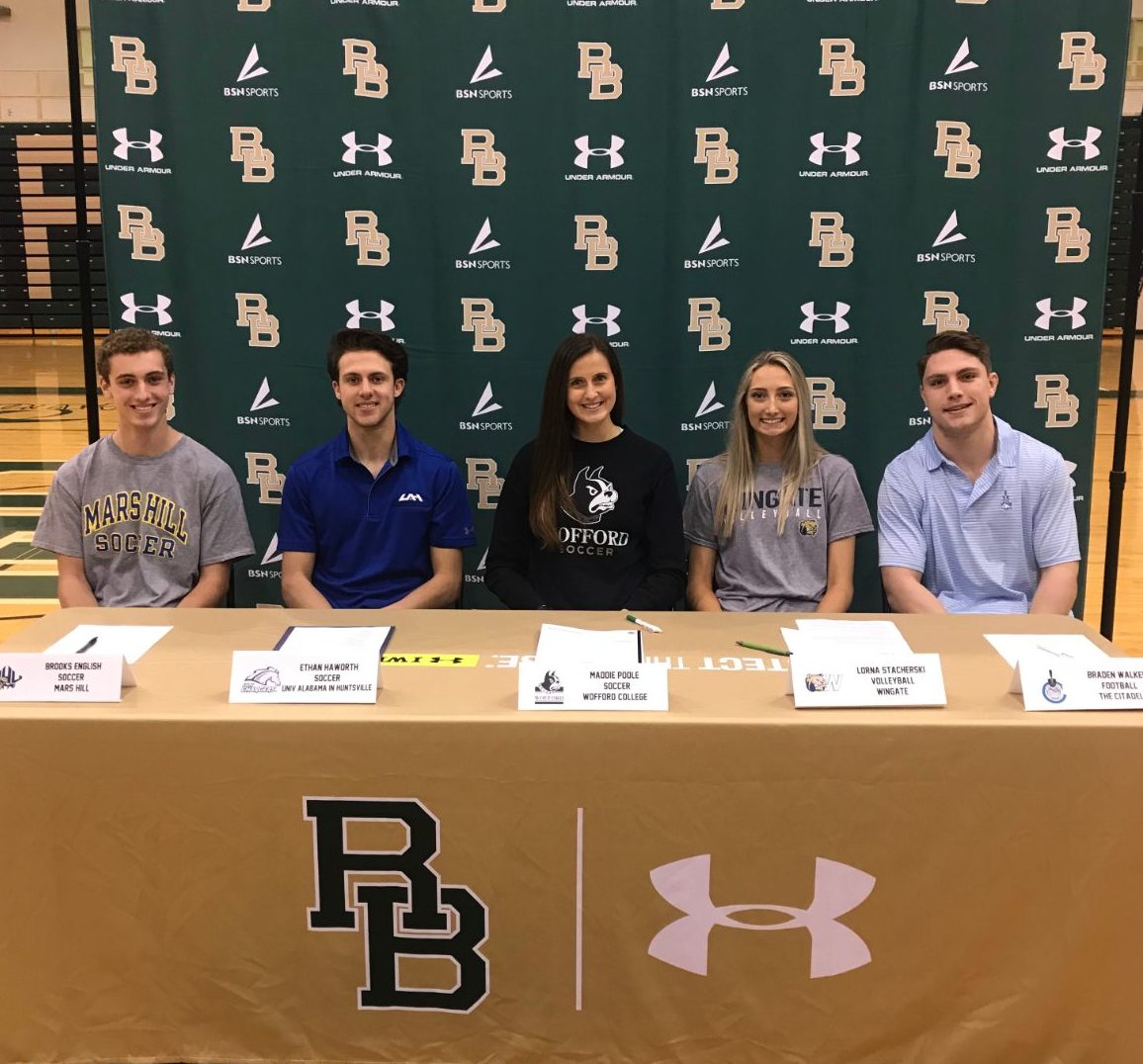 On Wednesday, five River Bluff Gator athletes signed national letters of intent to further their athletic and academic careers at the collegiate level. This signing featured two members of the men’s soccer team, a women’s soccer player, a volleyball player, and a football player. Each student-athlete has exhibited not just an elevated skill set on the fields and courts, but also leadership, character, and a strong work ethic in athletics and the classroom.

Maddie Poole committed to Wofford College, where she’ll continue her soccer career at the NCAA Division 1 level. Poole has been playing soccer since she was four years old and has been playing with a nationally competitive club soccer team at South Carolina United since the 6th grade. She has won many different club and conference awards through club soccer, which has also allowed her to travel the country, playing in tournaments in cities like  Seattle, Houston, and New York City. Poole is a rare 4-year varsity letterman for River Bluff’s women’s soccer program. She is a two-time all-region team member, was nominated for region player of the year in 2019, was on the All-Viking Cup Team in 2019, and was a member of the All- Midlands High School Soccer Team in 2019. She plans on majoring in biology with a pre-med track while at Wofford. Poole aspires to one day be a pediatric orthopedist and help young athletes who are dealing with injuries. When Poole speaks of her experiences as a soccer player, she mentions with a smile, “I fell in love with the game of soccer from an extremely young age and I continue to enjoy it more than anything else in the world.”

Lorna Stacherski committed to play volleyball at Wingate University on a full-ride scholarship. Stacherski started playing volleyball in middle school after watching her older sister Abby play very high-level competitive volleyball. She was so taken with what she observed, she joined her sister on the court. She adds, “It was so much fun traveling with her all over the country to play, I decided to quit all of my other sports to compete on a traveling team.” Stacherski moved from Winston- Salem, NC to Lexington before her junior year and played two seasons with the Gators. She made her presence felt in those 2 seasons with the River Bluff Volleyball program. In 2019,  she was named South Carolina MaxPreps/AVCA National Player of the Week. She earned a spot on the SC North-South All-Star Team. She was also named All-State, All-Region, and made the AVCA Region team. While Stacherski has yet to declare a major, she is very interested in forensic psychology or physical therapy.

Ethan Haworth signed his letter of intent to play soccer with the University of Alabama-Huntsville. Haworth began playing rec-league soccer when he was around 4 years old and played his first year of club soccer after he turned 8. The move to club-level competition made a big impact. “I ended up really enjoying playing more competitively and decided to keep with the sport,” Haworth mentions. Haworth also has experience across the country in his respective sport. While living in California, his club team competed in the Volkswagen Junior Masters tournament in Kansas City, which hosted the 20 best U13 teams from around the country. He moved to South Carolina in the fall of his 7th-grade year and, not surprisingly, made the soccer team a few months later. As far as club soccer goes, Haworth has captained his team since his freshman year and was recently appointed as the Boys’ Captain for the entire club. For the Gators, he is a 3-year varsity member, captain of this year’s squad, and one of River Bluff’s best goalies in their 7-year history.  Ethan’s choice of college is an interesting one. He explained, “I realized early on in high school that I wanted to pursue Aerospace Engineering as my degree program in college. After many Google searches, I came across the University of Alabama in Huntsville, which happened to have both an award-winning Aerospace department as well as an NCAA soccer team. After going to an ID camp last summer, I spoke with the coach and was offered a roster spot beginning in the Fall of 2020.”

Brooks English is taking his soccer talents and skills to Mars Hill University. English became interested in sports at an early age, starting soccer at the age of three, and quickly settled on soccer as a clear favorite. He made the River Bluff JV team his seventh-grade year and has been a key member of the Gator Men’s Soccer program ever since. Battling set-backs due to injury, Brooks worked hard on and off the field to continue pursuing his passion of playing soccer. That determination and grit paid off. In addition to being a successful student-athlete, he is a member of the Honor Society, Beta Club and National Society for High School Student Scholars. On his choice of colleges, English says, “I went to several camps until one of my old teammates told me about Mars Hill. I went to a camp there and fell in love with the area, the coaching staff, and the people in the town. I didn’t just choose Mars Hill for soccer,” he continues, “I want to be a physical therapist and they offer me both a quality education in a brand new facility and a future in soccer.” English plans to major in Integrated Health Sciences, specializing in physical therapy. After college, he plans to continue his education by receiving a doctorate in physical therapy.

Braden Walker will be furthering his athletic career on the football fields of The Citadel. Walker comes from a family of 4 consisting of his mom (Christi), his dad (Lewis), and his sister (Kayla). He began playing football at the age of 4 and quickly found a passion and love for it. Walker just finished a storied career for River Bluff football, where he earned All-Region honors 3 years in a row and All-State two years in a row. Walker was selected to play for South Carolina on its Shrine Bowl team this year as well. Recognized for his toughness as a tailback, Walker also put in duty as quarterback, punter, defensive back, kicker, and other positions as needed. Most of all, Walker may be best known in the Gator football program as a dedicated leader. He plans on studying business in hopes to graduate and become a contractor and eventually a project manager. 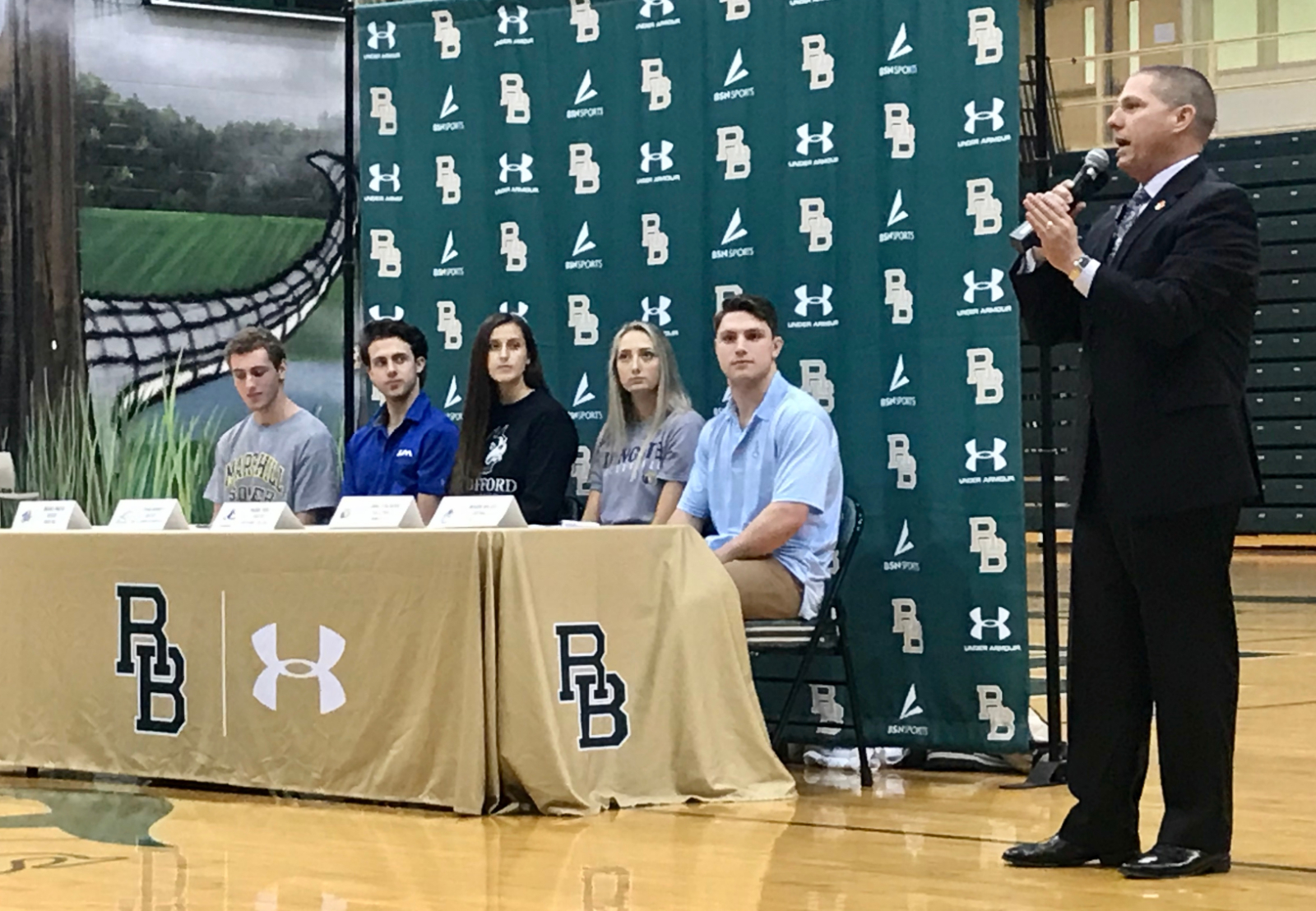