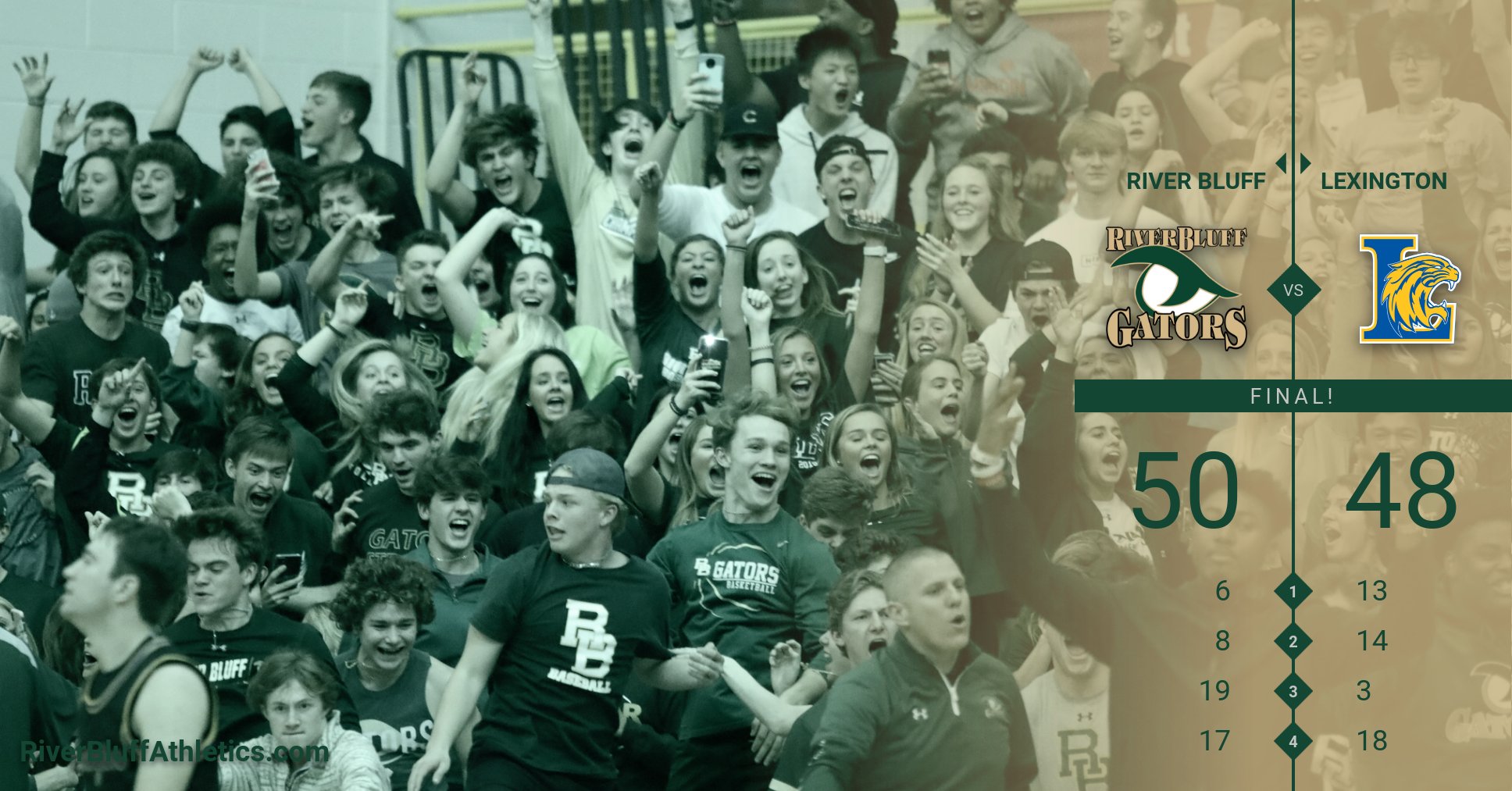 River Bluff took the floor at Lexington Thursday night with AAAAA state playoff implications at stake and used a big second-half comeback to upend the Lexington Wildcats in their own gym on senior night 50-48. The Gator win split the regular-season series with the Wildcats, who emerged with a victory when visiting the Gator Pit earlier in the year. The win also landed River Bluff in a 1-game playoff Saturday against Dutch Fork for 1st and 2nd place in Region 5.

The night started off sluggishly for the Gators. River Bluff was only able to put 6 points on the board in the first quarter and a late 6-0 run by the Wildcats gave Lexington a 13-6 lead going into the 2nd quarter. The Gator’s first-half woes continued as they started the second period with 2 straight turnovers. When the halftime horn sounded, River Bluff headed into the locker room disheartened, dejected, and trailing Lexington 27-14. This clearly was not the intended gameplan against their crosstown rival.

Coach Ben Lee must have found a spark in the locker room, however, because the Gators came out in the third quarter with an obvious renewal of spirit and purpose. Even with team leader Myles Jenkins spending the second half of the period on the bench after picking up his third foul at the 4:35 mark, River Bluff chipped away at the lead and implemented a stout defense. At the 3:02 mark in the third, Gator guard Landon Stills knocked down a 3-pointer to get the Gators within 1, 27-26. Stills then had a big layup to give River Bluff the lead at 28-27, followed by Josh Cranshaw’s put-back to go up 30-27. At the end of the third, River Bluff was in the lead 33-30.

They would never trail again in the game.

The fourth quarter was overflowing with excitement. The packed house erupted time and again as the Gators and Wildcats traded baskets. With 13 seconds remaining, Lexington tied the game at 48 on 2 free throws. On the ensuing possession, Myles Jenkins was fouled and sent to the line to shoot 2 free throws. With 11 seconds showing on the clock, Jenkins drained both shots amidst the frantic screams of the Lexington student section, just behind the goal to which he was shooting. The Wildcats inbounded the ball and drove it up the floor against heavy pressure from the Gators. As time ticked away, Lexington lost control of the ball and the final buzzer sounded. River Bluff emerged victorious 50-48.

More information on Saturday’s match-up against Dutch Fork and other playoff scheduling will be forthcoming.