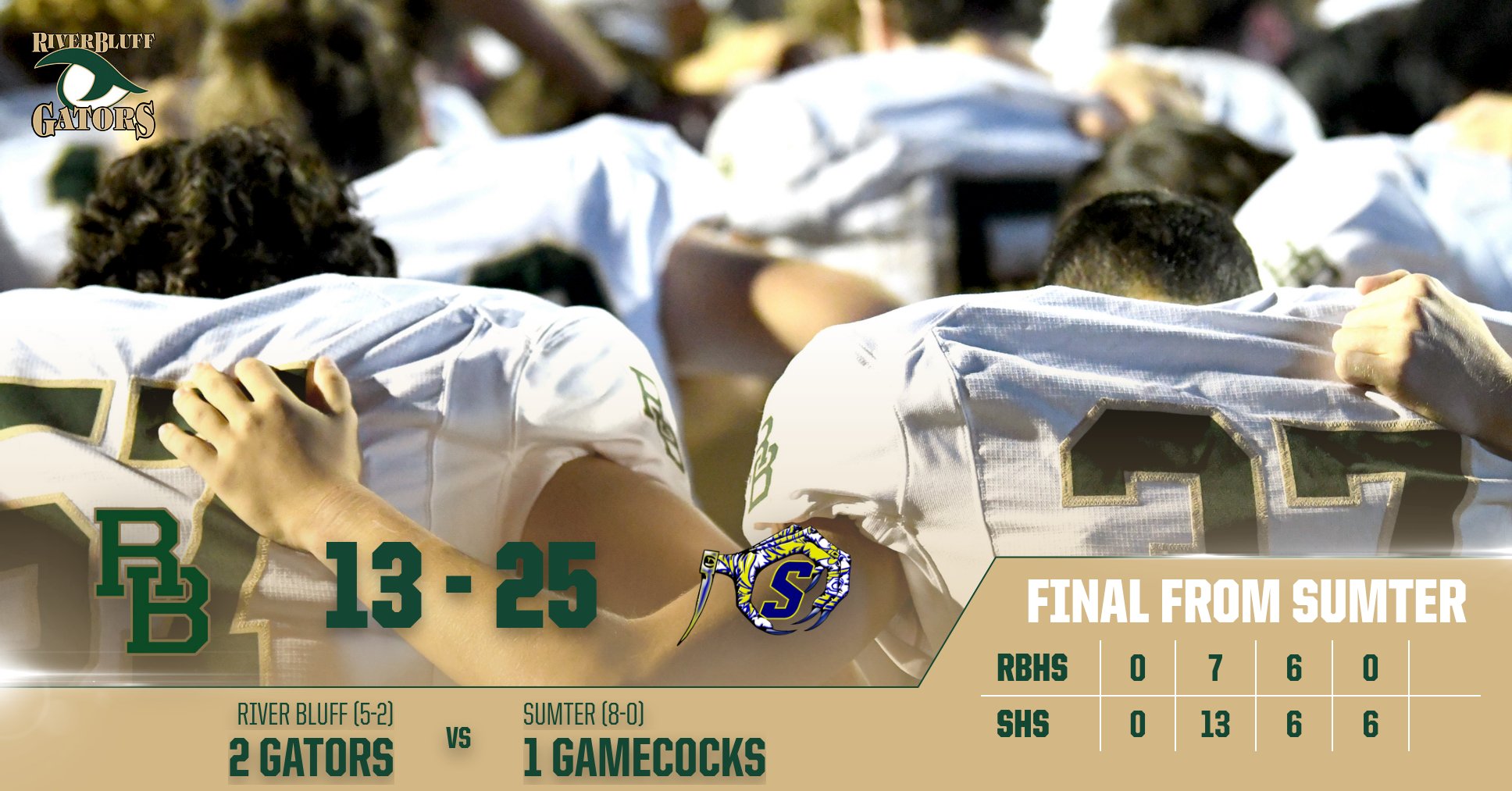 To the casual fan who may not follow River Bluff football, that might indicate a positive outcome for the Gators Instead, it was the consequence of a heralded run game that simply could not find its stride. When a team that averages over 200 rushing yards a game is only able to churn out 53, it typically spells an imminent demise for that team.

That’s what happened to the Gators at Sumter High School. The Gamecocks seemed to solve the Gators’ option game, a puzzle that had stumped every opponent since their opening loss to Dutch Fork. On the legs of running back Riley Myers, River Bluff was running wild over opponents, earning a second place finish in the region and a first-round playoff victory over previously unbeaten and one-seed Fort Dorchester. The Gators were amassing more than three times the yardage on the ground than through the air. There was no secret what the Gators hoped to do when they walked onto the field.

Sumter, however, was prepared. It appeared as though they had decided that if River Bluff was to win, the Gators would have to do it on the arm of quarterback Jackson Stone. The Gamecocks ended up holding River Bluff to 53 yards rushing, and only 9 of those came from Myers. The hard-nosed tailback, who had run for almost 700 yards over 5 games, was met at the line of scrimmage nearly every time he touched the ball. There just simply was nowhere to go.

Although the game was within reach until the last few minutes, the Gators trailed Sumter for the duration. That combined with their running woes forced River Bluff to turn to their passing game. It was a valiant effort. Stone went 11 for 27 for 187 yards and 2 touchdowns – 1 to Apollos Cook, who had 84 yards on 4 receptions, and 1 to Toriaun Leapheart out of the backfield. It just wasn’t enough to overcome the Gamecocks.

While Sumter relied on a balanced attack, they were able to rely on running back Nathan Harris-Waynick to carry the team in the second half, and maintain the ball and the lead. Harris-Waynick accounted for 181 of the 204 rushing yards for the Gamecocks and a touchdown. Quarterback Hayden Vasquez threw for 204 yards and a touchdown as well. Running Back Keion Brown added a touchdown and Zyeir Gamble ran a fumble recovery back into the end zone for Sumter.

The River Bluff defense played well, but just couldn’t stop the opposing offense enough times, like they had in so many games prior. Adam Molnar once again shined on defense, accounting for 9.5 tackles, 2 for a loss. Uriah West (9 and 1 TFL) and Kevin Culcleasure (6.5 and 2.5 TFL) were also a part of a defense that employed a team effort week after week. Molnar and Thomas Powell each had interceptions.

There were some plays that hurt the Gators – like their fumble into the end zone in the first quarter that cost a touchdown and gave the ball to the Gamecocks. And the fumble that resulted in a scoop and score for Sumter in the second that gave the gamecocks a 13-0 lead. A couple of Gator drives got deep into Gamecock territory and stalled as well.

All in all, River Bluff played hard, a trademark of theirs. It just wasn’t their night. Still, the season was a successful one for head coach Blair Hardin and the River Bluff Gators. The future of the Gator football program is indeed a bright one and next season promises to be another fantastic one.