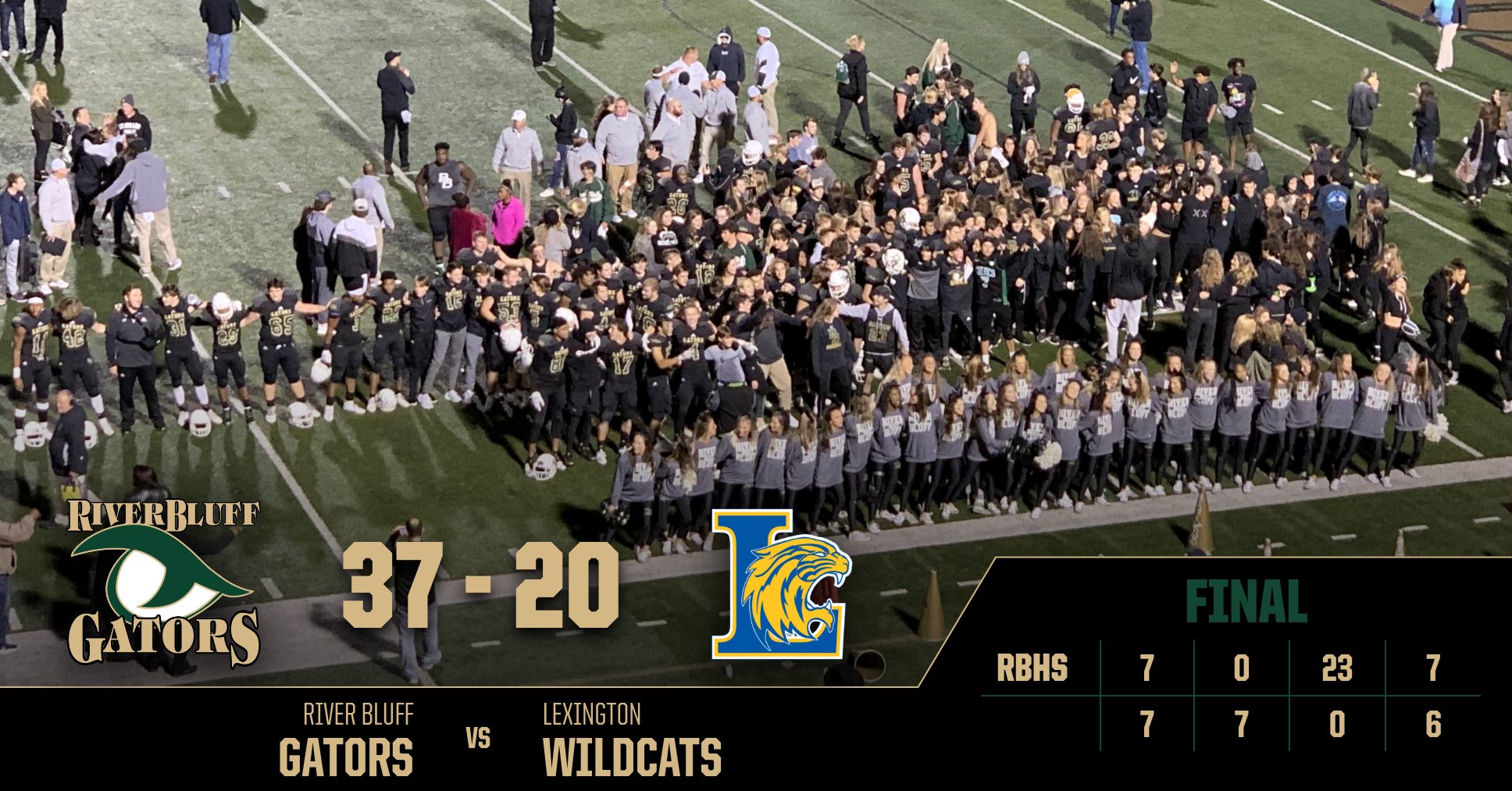 After a sluggish first half, the River Bluff Gators came alive in the 3rd quarter, lighting up the scoreboard for 23 points, en route to a 37-20 victory over crosstown rival Lexington.

As expected, The Swamp was rocking with another RBHS-LHS crowd in anticipation of yet another classic match-up between the two Region V and District 1 schools. Again, they were not disappointed – at least on the River Bluff side.

It appeared that the night would feature a battle of defenses. In fact, after peppering the first half with turnovers, the Gators found themselves trailing 14-7 at halftime. River Bluff, however, came out of the locker room after the half and found their running game in a big way. The defense also stepped up with some impressive stops as momentum swung heavily in the Gators’ favor. They were able to ride that momentum shift all the way to the final gun, outscoring the Wildcats 30-6 in the second half and winning the game 37-20.

On offense, River Bluff’s rushing game, the Gators’ bread and butter, amassed 369 yards. Tailback Braden Walker accounted for 175 of those himself. Walker also added 4 touchdowns and averaged 8.8 yards per carry. Riley Myers contributed 95 yards and a touchdown and QB Jackson Stone ran for 76 yards. Stone went 6 for 8 through the air for 52 yards.

The Gator defense was stout yet again, preventing the Wildcats from many sustained scoring drives. Two of the three Lexington touchdowns came off of long runs by Ahmad Bynem-Scott – one for 55 yards and the other for 70. The third score was aided by a 35 yard pass from Elijah Ogden to Alex Reed down to the River Bluff 6. The Gators came away with two big takeaways as well – both fumble recoveries – one by Austin Glad and the other by Casey Franco. Jakari Davis and Adam Molnar had big nights on the defensive side of the ball, accounting for 7 tackles each. Davis had 2.5 tackles for loss and a sack while Molnar scored 3 tackles for loss.

The night featured two very special moments. The first, which honored all of those who are victims, survivors, and fighters of breast cancer, occurred between the first and second quarters when Samantha Molnar, a Gator Football family member, was awarded with a check from funds raised through the sales of breast cancer awareness t-shirts.

The second moment occurred right after the second half opening kickoff, when all in attendance paused in silence and raised 3 fingers in support of Hilinski’s Hope and mental health and wellness. River Bluff’s Golden Gate Movement Club sponsored the event and made Hilinski’s Hope wrist bands available on both sides of the stadium.

A scary moment struck the entire stadium when Lexington player Coleman Van Coutren was carted off the field after a violent collision on a punt return. According to sources, the latest news is good and the young man will be released.

With the win, River Bluff secures a home playoff game for the second year in a row, a trend Coach Blair Hardin hopes becomes an expectation for the Gators. Details on the time and opponent will be published soon.