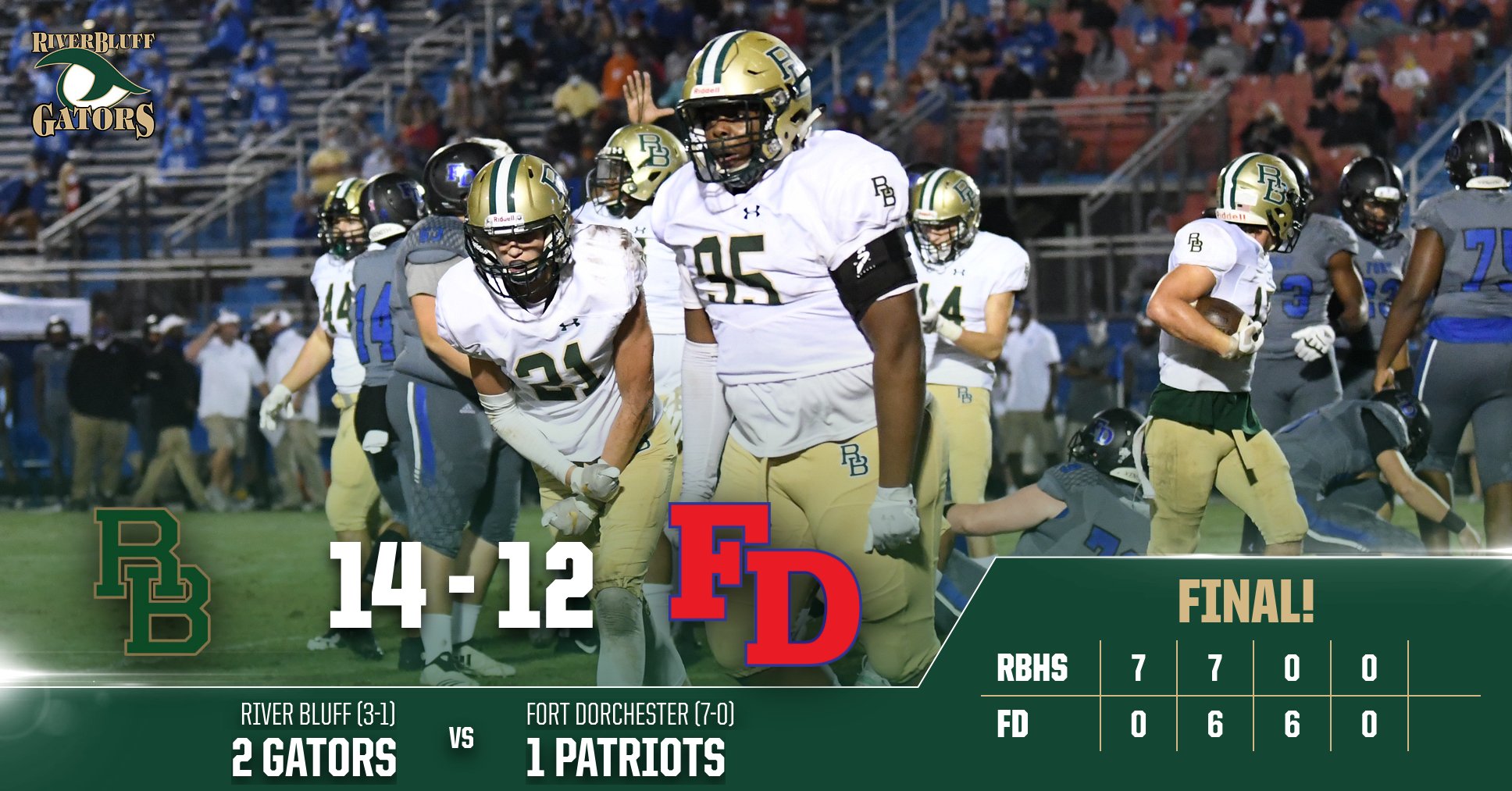 River Bluff turned Friday night’s SCHSL AAAAA 1st round Lower State Playoff game against Ft. Dorchester into a hard-fought, muddy, slugfest…and that was right up their alley. The blue-collar Gators churned out two touchdowns behind a hard-nosed ground attack and a brilliant performance by a tough defense to stifle a high-flying Patriot squad, taking home the win 14-12.

As the natural turf at Fort Dorchester started showing its wear, the white jerseys of the visiting Gators turned a nice shade of mud, giving proof to the battle that was taking place on the field. It didn’t take long for the gleam to disappear from the white road uniforms as the Gators jumped out to a 14-0 lead early in the game on the legs of running back Riley Myers.

Myers, as usual, was a workhorse out of the backfield, cranking out 155 yards on 22 tough carries against a hard-hitting Patriot defense. He was responsible for the Gators’ first touchdown, coming on the first possession of the game at the 8:54 mark in the first quarter.

As the second quarter began, River Bluff pulled a trick play out of its hat to score again. QB Jackson Stone handed the ball to Myers who then handed it to Thomas Powell on a reverse. But instead of running the ball, Powell set his feet and launched a pass into the waiting arms of a wide-open Jackson Stone, who started the play. Stone trotted into the end zone to give the Gators a two-TD lead. Brayden Rivers converted both extra points, which turned out to be the difference in the final score.

Down but certainly not out, Fort Dorchester had their turn in the end zone in the second quarter on a 6-yard Michael Smalls run. In fact, Fort Dorchester pounded out 178 yards on the ground, with 171 coming from Dwayne Wright, who also accounted for the Patriots’ second touchdown on the evening, this one coming in the third. Both touchdowns, though, were followed with missed extra points – the first was a missed PAT kick by Chase Kennedy and the second was a failed 2-point conversion.

The Gator defense came up with some huge stops late in the game, somehow reaching down to summon every bit of strength and grit they could muster, forcing Fort Dorchester to attempt two field goals. Kennedy missed the first try and Jonathan Guzman the second. The last kick came with just over a minute to play, sealing the victory for River Bluff. Stone simply had to kneel twice for the Gators to earn a trip to the second round.

A look at the stat sheet will tell you how hard-fought the game was. The two teams were only separated by 23 yards of total offense and only 5 yards difference in total rushing. One notable difference was on the defensive side, where River Bluff led in the sack category 3-0.

Defense was indeed the story for the Gators. Adam Molnar led the way with 10 tackles (8 solo, 4 assists), two of which were tackles for loss. Thomas Powell followed with 9 (6 and 6). Kevin Culcleasure chalked up a sack and 1.5 tackles for loss. Jonathan Cook, Preston Sansone, Joseph Scott, Brice Colter, Wyatt Proctor, and Jakari Davis all earned TFL and sack numbers as well.

River Bluff will hit the road again next Friday to face the Sumter Gamecocks in the second round of the SCHSL Football AAAAA Lower State Playoffs. Don’t be surprised if Coach Hardin, if asked what color jerseys the Gators will wear for that game, responds simply with “mud.” Stay tuned to RiverBluffAthletics.com for ticket information and more.